The Canadian Association of Physical Medicine and Rehabilitation is a member service organization that represents Canadian physiatrists and promotes their pursuit of excellence in the field of physical medicine and rehabilitation. The CAPM&R was founded in 1952 and has over 400 members today. The CAPM&R is an Accredited Provider for the Maintenance of Certification Program of the Royal College of Physicians and Surgeons of Canada.

The Association of Academic Physiatrists (AAP) is a professional society with a mission to create the future of academic physiatry through mentorship, leadership, and discovery. Its members are leading physicians, researchers, educators and in-training physiatrists from 40 countries. The AAP holds an Annual Meeting, produces a leading medical journal in rehabilitation: AJPM&R, and leads a variety of programs and activities that support and enhance academic physiatry. To learn more about the association and the specialty of physiatry, visit physiatry.org and follow us on Twitter at @AAPhysiatrists. 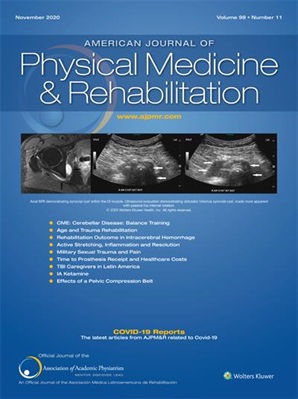 Owings Mills, MD, October 19, 2020 – The Association of Academic Physiatrists (AAP), the leading academic physiatry society in the world, has teamed up with the Canadian Association of Physical Medicine & Rehabilitation (CAPM&R), the professional society for physiatrists in Canada, to make the American Journal of Physical Medicine & Rehabilitation (AJPM&R) the official journal of CAPM&R. This new partnership will connect CAPM&R’s membership to the AAP community and member benefits, expand the reach of AJPM&R, and provide a catalyst for PM&R innovation within the United States and Canada. This is an excellent step forward in further enhancing collaboration between the CAPM&R and both the AAP and the AJPM&R, reports Larry Robinson, MD, President-Elect of the CAPM&R. We are honored to have the AJPM&R as the official journal of the CAPM&R and we are delighted for our members to have access to the wonderful benefits of the AAP. Physiatrists in each country bring diverse strengths and experiences to the field of PM&R and working together will continue to enhance our knowledge and skills.

This partnership highlights the AAPs commitment to strengthen academic excellence in PM&R around the world, shares Adam Stein, MD, President of the Association of Academic Physiatrists. The union of these two societies is an exciting step in building a community of physiatrists that collaborates across borders. As mentioned above, AJPM&R, the AAP’s official medical journal, will now also become the CAPM&R’s official medical journal. As it relates to the AJPMR, both AAP & CAPM&R members will now have equal membership access to the following: digital access to every issue of the journal, increased opportunity to serve on AJPM&R’s Editorial Board, and Annual Meeting abstracts will be published in a journal supplement. In addition, CAPM&R members will now get full access to AAP member benefits, including its quarterly member magazine, mentoring program, Virtual Campus, discounted rates to its Annual Meeting, and more. This collaboration is very positive for both societies, explains Walter Frontera, MD, PhD, Editor-in-Chief of the American Journal of Physical Medicine & Rehabilitation. The members of the CAPM&R will receive a high-quality journal and the contributions of our Canadian colleagues to the AJPM&R will strengthen the Journal and our knowledge base.